It was clear after just a few minutes from being in Honk Kong that neither of us had ever been anywhere quite like it.

After an uneventful but long 12 hour flight, we were glad to make it to our AirBnb without any trouble and drop off our extremely heavy bags.

With no time to waste we were straight out to join the crowds at the Tsim Sha Tsui promenade, the perfect viewing spot for the daily Symphony of Lights show. With impressive views of the skyline across the harbour this was a great way to start our trip. 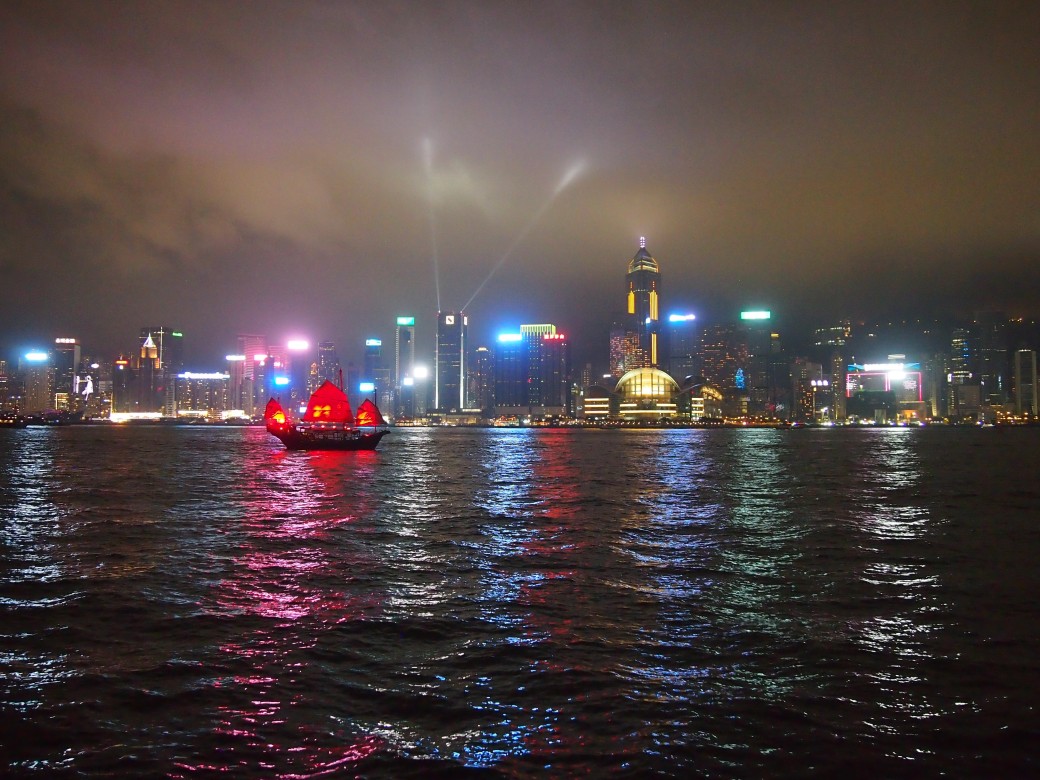 Our apartment was situated on Nathan road, the main shopping street of the chaotic Mong Kok district, with the surrounding roads full of designer shops, street markets, neon signs and most of all people!  Nowhere was it more obvious that Hong Kong is one of the most densely populated cities in the World.

Our pick of the markets for weirdness was the goldfish market, with hundreds of fish in small plastic bags lining the storefronts as well an assortment of other animals, including cats for sale. Also worth a visit are the temple street night market, and flower market.

On our second day we decided to explore Hong Kong island itself, taking the Star Ferry from Tsim Sha Sui. Not only do you get great views across as you travel across the harbour, but the short journey also only cost $4 (40p) for both of us. Hong Kong was generally very easy to get around, with excellent public transport as you would expect in such a large city.

More expensive was the tram ride up to Victoria Peak, with this costing $90 (£9) each including entrance to the viewing platform. Timing this so we could take in the view before and after sunset,  we actually managed to get neither as the fog set in.

Luckily we did get some sort of view after taking a short walk from the peak along the Hong Kong trail, with this photo taken in the shortest of breaks in the clouds.

We spent our second evening in the trendy SoHo district, a much more relaxing experience than Mong Kok. While nothing on the original Soho, there was a great atmosphere with plenty of bars and restaurants to choose from. We chose Peak Cafe for cocktails, with this overlooking the central-mid levels escalators, at over 800m the longest outdoor escalator system in the world (very exciting I know).

More exciting was our first ever experience of a Michelin starred restaurant, Tim Ho Wan, located in the Sham Shui Po area of Kowloon.

Apparently the worlds cheapest, a meal for two at this dim sum restaurant set us back just $131 (£13). The highlight was definitely the BBQ pork buns, and even the chicken feet were good! The only downside was our embarrassing chop stick skills.