The UNESCO World Heritage Site of Halong Bay was high on our list of things to do when visiting Vietnam. The vast bay has over 1,600 islands and inlets, and is therefore best viewed by boat. With more than 200 different cruises available, there was an almost overwhelming choice of tours to choose from. After lots of research on the different boats and itineraries, we opted for the Lan Ha Legend, which is aimed at couples and families, and is reasonably priced.

We decided on a two day/one night itinerary, with this giving us the opportunity to cruise through Halong Bay and stay overnight in the quieter but equally impressive neighbouring Lan Ha Bay.

The tour included a transfer from Hanoi, and we were picked up early from our hotel before beginning the three hour journey south. We took a short vehicle ferry across to Cat Ba Island, before continuing to Gia Luan wharf, where the cruise was to begin.

Despite the thick grey clouds, we were immediately struck by the beauty of our surroundings, with huge limestone mountains rising out of the water as far we could see. It was easy to see why Halong Bay is one of Vietnam’s most popular tourist attractions.

We boarded our home for the next two days, and were shown to our cosy cabin. After quickly settling in, it was time for lunch where we had the chance to meet our fellow guests. It soon became apparent that all 11 of them were French, making us the odd ones out. Our visit coincided with the French school holidays, and Vietnam is clearly a popular destination. With Simon’s french nonexistent, and my recollection of school lessons limited to J’ai mal à la tête (I have a headache), we were hopeful their English would be better. Thankfully we were in luck, with one of the guests being an English Teacher, and therefore designated translator for the next two days.

We enjoyed an impressive seafood lunch in the small dinning room, before making our way to the top deck to enjoy the views as we continued our journey through the bay. It was beautiful to watch as the boat navigated through the maze of islands, before arriving into the less touristy Lan Ha Bay.

One first stop was a two-hour kayaking trip around a lagoon, with the sun finally making an appearance just as we arrived. We climbed into a double kayak, which wasn’t quite to the high standard we were used to in New Zealand, but it was still great to get back out on the water. 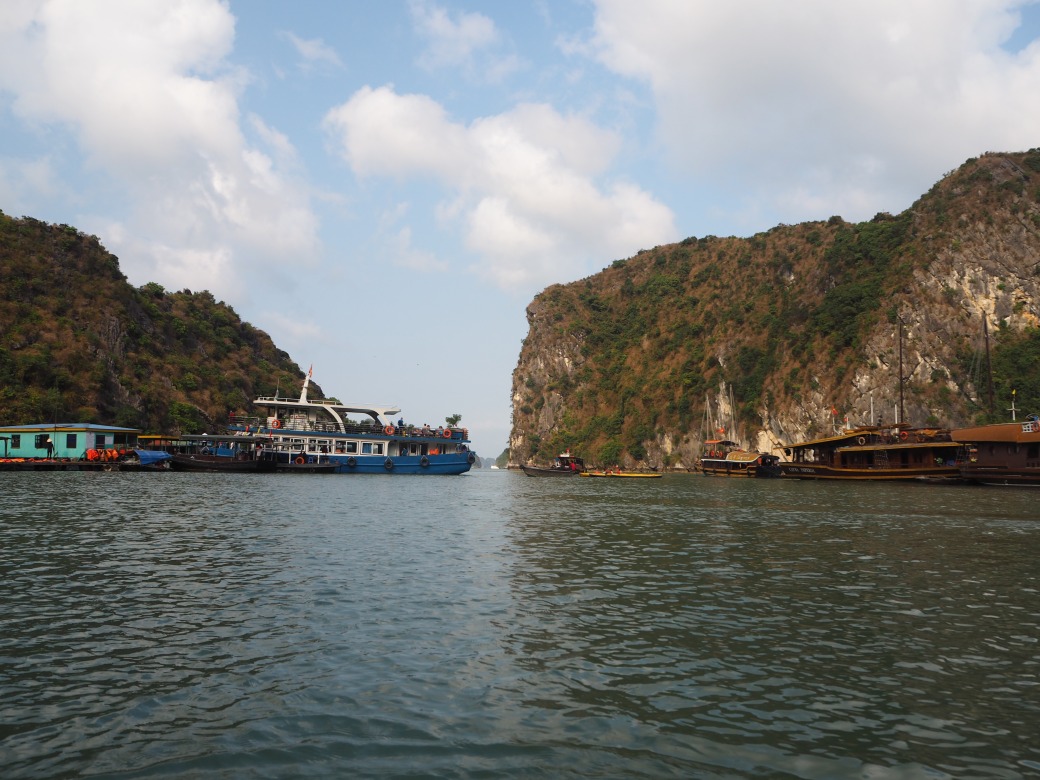 We made our way through the beautiful lagoon, travelling around the limestone islands and into a number of small dark caves. As we paddled, we managed to spot lots of small fish, as well as some huge jellyfish. 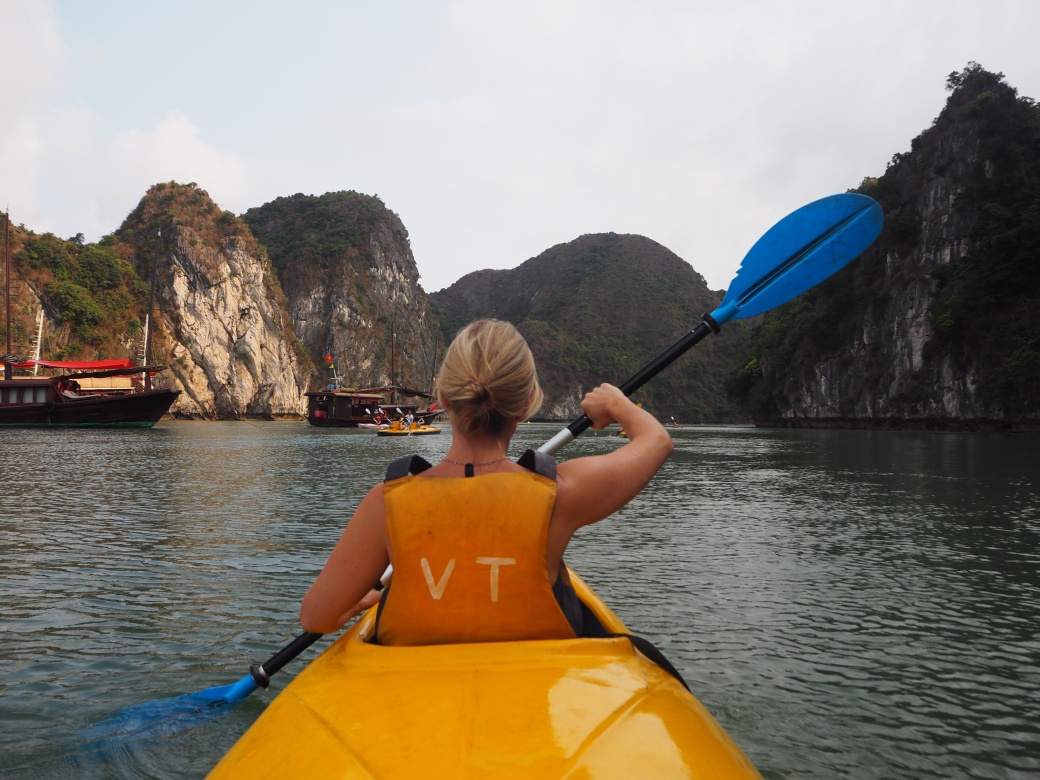 After a great few hours of kayaking, we made our way back to the boat, and continued our journey through the bay. At our next stop we had the opportunity to go swimming, however given the murky water and jellyfish we had spotted earlier we declined the offer, instead opting for happy hour cocktails on the top deck. Our fellow guests clearly thought this was a good idea and soon everyone had joined us.

We stayed on the top deck, and watched as the sun set beautifully behind the surrounding islands, while enjoying the cool sea air, and refreshing drinks. 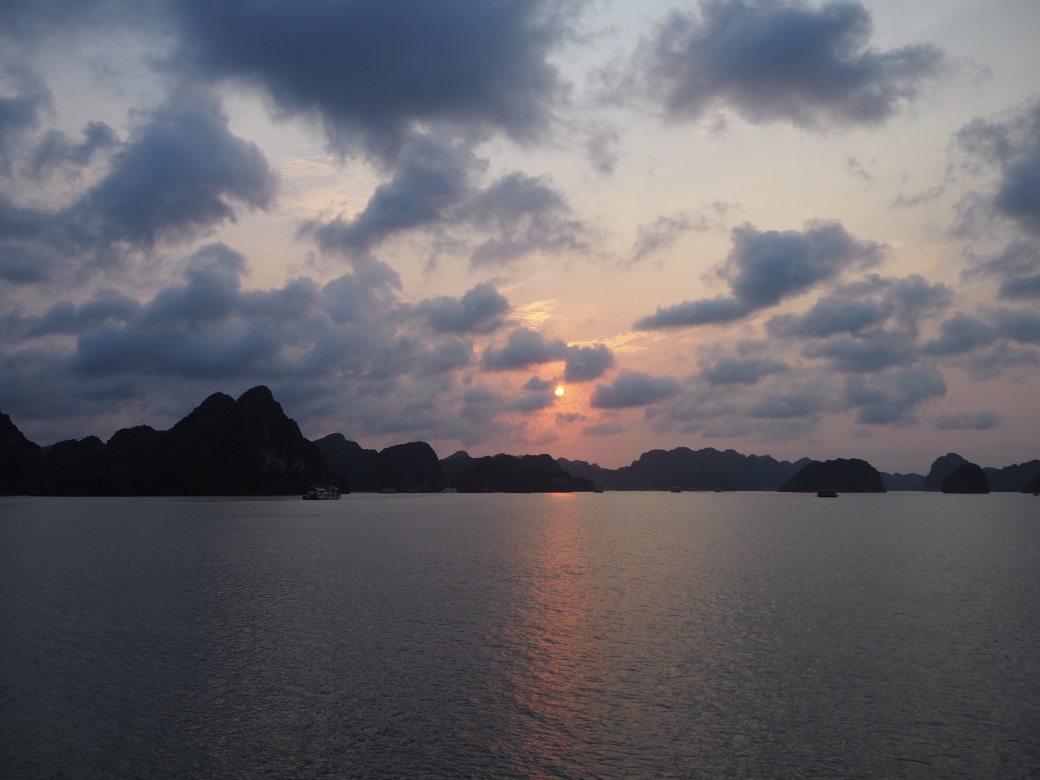 It was then time for our Vietnamese Spring Roll cooking class. It was interesting to see the technique required to make them, especially given how many we had eaten since arriving in the country. We managed to get the hang of it fairly quickly, although some of the other guests were not quite so successful.

We returned to the top deck, where the spring rolls were served as the first course of a delicious seafood BBQ, some of which had been caught earlier by the crew. The food was excellent, especially given that it had been prepared on such a small boat. With a second happy hour starting soon after dinner, we stayed on the deck and enjoyed some more drinks while practicing our French.

Our early start the following morning was a challenge, with too many happy hour cocktails meaning I could actually make use of the phase ‘J’ai mal à la tête’. After a quick breakfast we were taken to a nearby pearl farm, which was founded in 1995 by Japanese experts and is located in a floating village in the Tung Sau area. 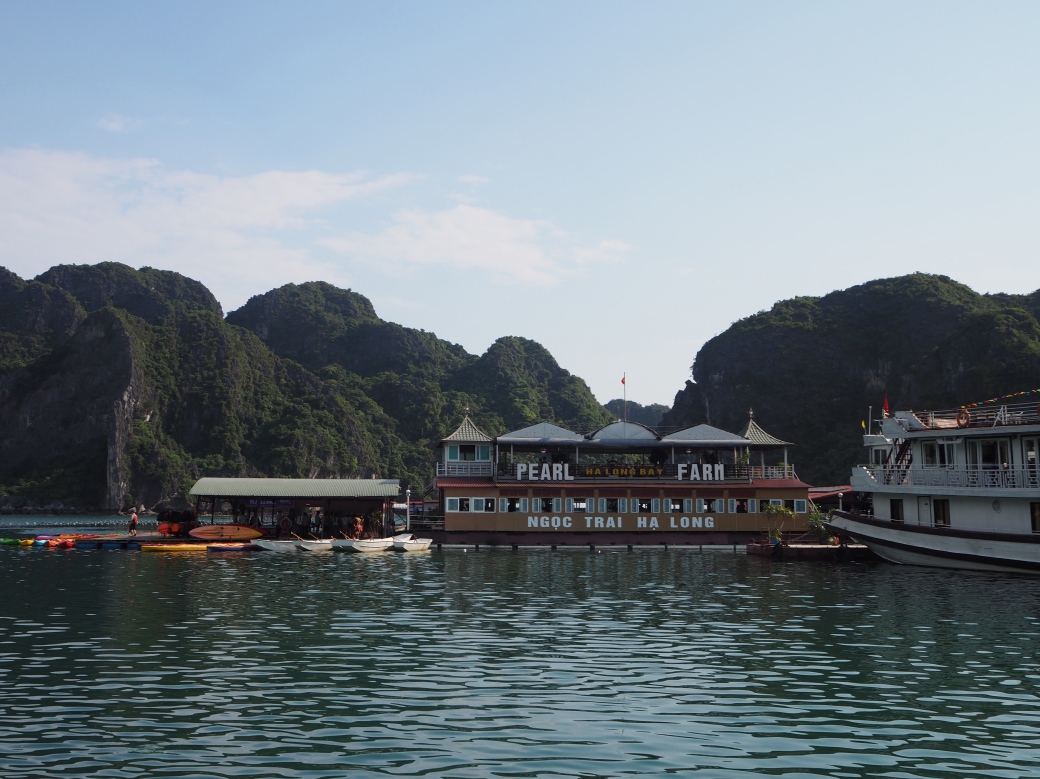 As we walked around the pearl farm, our guide gave a detailed explanation of how the pearls are harvested and prepared. We then watched as one of the staff used specialised tools to complete the intricate process of cultivating the pearls. With all the hard work involved, and the long wait until they are ready, it is easy to understand why pearls can be so expensive.

Our next stop was in the jewellery store, although Simon made sure that this was only a brief visit before we made our way to the upper floor, to admire the view of the surrounding farm.

After climbing back aboard the boat, we began our return journey to Cat Ba Island, with just one further stop for some more swimming. This time we took up the offer, and enjoyed a refreshing swim in water that was much clearer than the previous day.

We spent the rest of the journey lazily sunbathing on deck, and before we knew it we were back at our starting point. After saying bon voyage to our fellow guests, we took a taxi into Cat Ba town, where we enjoyed lunch with a view at Mona’s Rooftop Garden.

After a few more relaxing hours in the town, we boarded a bus to our next destination, the rural region of Ninh Binh. We had a great two days exploring Halong Bay, and it definitely lived up to our very high exceptions.