After taking a bus south from Cat Ba, we arrived into Ninh Bình, a rural province known for its natural beauty and important cultural sites. It was a long journey, and by the time we arrived at our hotel it was late. We therefore decided on an early night, in preparation for a busy day of exploring.

With the main attractions spread out across the region, we decided to hire a motorbike from our hotel. This gave us more freedom to explore, and a chance to experience Vietnam’s preferred mode of transport.

We jumped on our Honda bike, and after a quick practice on some quieter streets, made our way to our first stop at Trang An. Yet another UNESCO World Heritage Site, Trang An is known as the Halong Bay of Land, with a lush green landscape of tall mountains surrounded by water.

The most popular way to explore the area is with one of three scenic boat tours. We had timed our visit with a Vietnamese public holiday, and despite arriving early, there was a long queue to board the small rowing boats. Eventually it was our turn, and we climbed aboard our boat, along with two other passengers.

The boat was rowed by an elderly lady of impressive strength, while there was also two small oars for anyone feeling strong enough to help out. We had chosen to do Route 3, which started with a trip through the 1km long Hang Dot Dot Cave. Our guide expertly navigated us through the dark and narrow passageway, which was so small that we even had to duck at several points.

We continued along the route, passing through the shorter and far wider Hang Van Van Cave, before entering into another stunning landscape of towering limestone mountains all around us.

Despite the huge number of other people out on the water, it did not feel crowded at any point, with the small boats split between the three routes and spread throughout the vast site. 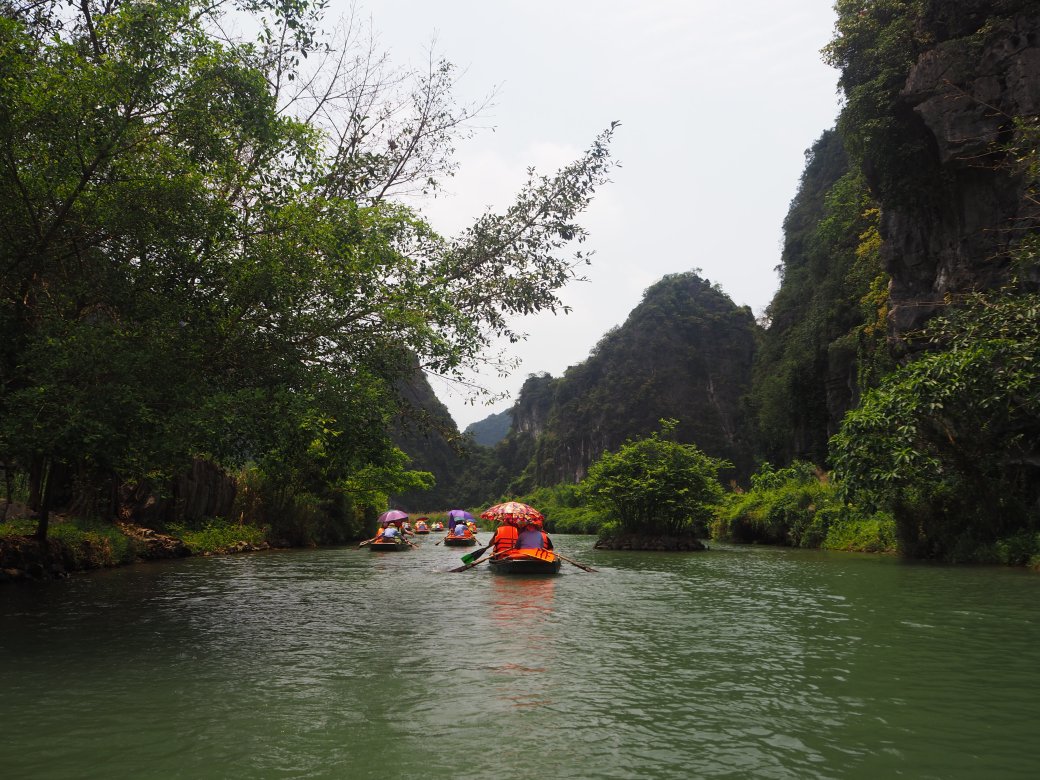 Trang An was used as one of the filming locations for the 2017 blockbuster Kong: Skull Island, which is part of the King Kong franchise. For the final stop on our tour, we took a short walk around what remains of the movie set, which includes several huts and a plane wreckage. While neither of us have seen the film, we could definitely see why such a dramatic landscape would appeal to location scouts.

We disembarked from our boat to the end the tour, ensuring we thanked our guide, who showed no signs of tiredness despite over two hours of almost constant paddling. After eventually finding our bike amongst the hundreds of others that were parked at the site, we made our way to the nearby town of Tam Coc.

We refuelled with a quick lunch at Thuy Linh, before continuing to Bich Dong Pagoda, which is located on the outskirts of the town. After crossing over a narrow stone bridge, we entered through the elaborate gate. The pagoda is on three different levels, with steep stairs to the upper sections. There was very few other tourists within the peaceful site, and it great to briefly escape from the crowds.

After cooling down with an iced coffee, we decided to further explore the quieter roads that surround the town. This took us along a series of narrow tracks, surrounded by lush green paddy fields, and enclosed by mountains. However it was hard to focus on the scenery, with the bumpy roads testing my novice biking skills.

Our next stop was at Hang Mua, a mountainside viewpoint that is another of Ninh Binh’s most popular attractions. There was lots going on at the base of the mountain, with various kiosks and stalls, as well as a number of platforms and seating areas overlooking the beautiful surroundings.

The summit of Hang Mua is reached by climbing 500 stone steps that wind their way up the mountainside. As we began to ascend the staircase, the sky above us turned an incredibly dark grey, and before we knew it the heavens had opened. This made the climb even more challenging, with the stone underfoot becoming very slippery, although it did at least cool us down a little!

With the storm showing no sign of letting up, we eventually made it to the summit and joined the crowds sheltering under the roof of the shrine that sits atop the mountain. After catching our breathe and taking in the surroundings, we had no doubt that the climb was worth the effort. The vast mountains stretched far into the distance, and we could just about see the tiny boats that we had been travelling on earlier in the day far below us.

This was our final stop for the day, and we began the journey back to our hotel, taking great care on the wet roads. Fortunately, the weather quickly cleared up, and were treated to an impressive sunset along the way.

The following morning we visited Bia Dinh Pagoda, which is the largest Buddhist complex in Southeast Asia. After hiring a motorbike again, we made the short ride to the entrance to the complex. We purchased tickets before climbing into an electric golf buggy which took us into the site.

We started our visit by climbing the impressive 22m bell tower, which gave us a great view of the 13 story Pagoda that towers over the rest of the complex. As we climbed to the top we seemed to get lots of attention, with other visitors wanting to say hello and practice their English on us.

It was another extremely warm day, and we managed to find some shelter from the sun in the covered walkway that takes visitors to the Dharma temple. The ornate walkway is lined with 500 stone Arhat statues, which are each around 2m high and weigh over 2 tonnes. 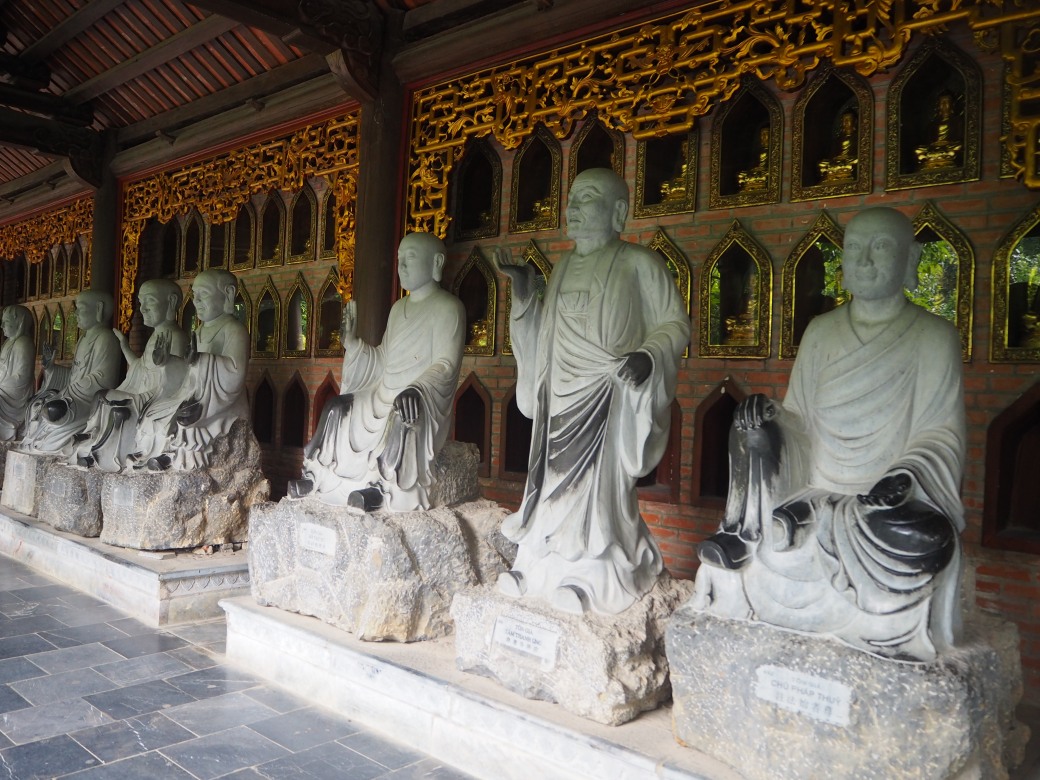 We continued along the walkway until we eventually reached the vast Dharma temple. Inside we found lots of worshippers as well as several other tourists admiring the lavish gold interior and huge buddha statues.

After concluding our visit to the pagoda, we returned our motorbike before making our way into Ninh Binh, where we would be catching a train back to Hanoi.